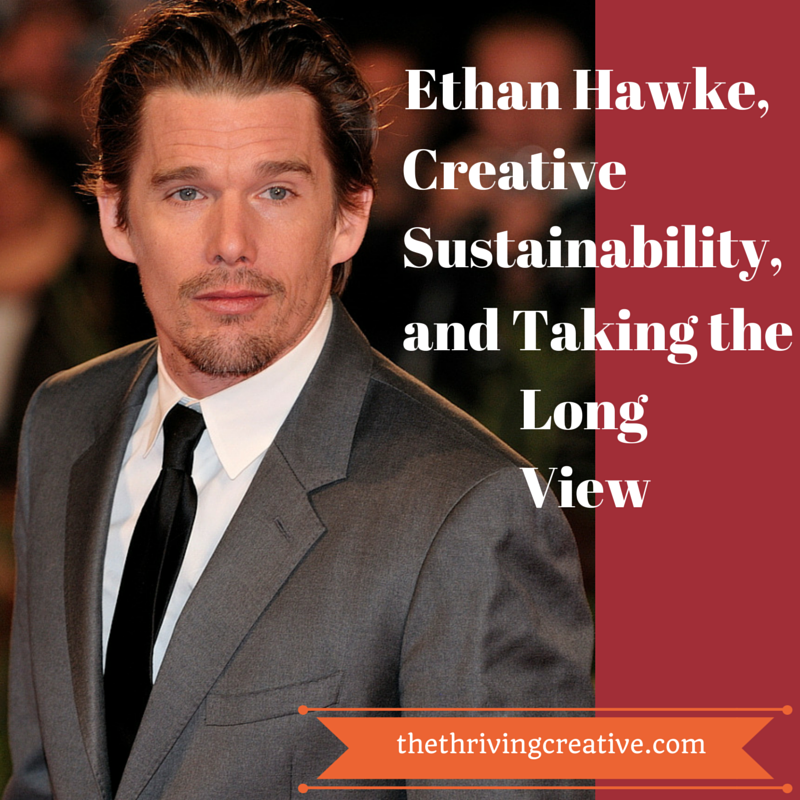 You know that old yarn about how ‘life is a marathon not a sprint?’

It’s your LIFE’S WORK that matters. And life’s work implies that you commit to the creative path for life. And allow the work that is inside of you to be released on its own timeline over your lifetime.

You will give birth to your creative enterprises when you and they are ready. That’s the sustainable way.

I was reminded of this by a recent article in Details magazine entitled Endurance Artist: Ethan Hawke.

Ethan Hawke is an interesting actor. We are basically the same age (he’s a year older) so I’ve seen his career unfurl. He’s gone from being ‘the hottest young actor’ when he appeared in Dead Poets Society through many different guises. As the ultimate 90’s Generation X Slacker he was an icon to my generation for films like Reality Bites and Before Sunrise. I even thought his Hamlet was quite good (in a Gen X way).

But he seemed to disappear. He would pop up from time to time, like in 2001 in Training Day, and then would disappear again. He did the sequel to Before Sunrise, Before Sunset and I know he has been doing some theatre in New York. But he always seemed to be either coming or going.

Or that was the impression year to year.

But now with the perspective of time we can start to appreciate the body of work he has amassed. This is particularly apparent with all the press he is getting for Boyhood – filmed over a 12 year period. I haven’t seen it yet, but he has been garnering very good reviews.

The point is that he has kept on making films. And when he isn’t making films he’s been doing theatre. But he’s also been writing and directing. Raising children and writing two novels.

The dude has kept busy. Whether in the limelight or not.

He has proved his longevity. His first film appearance was in 1985 so he has been in the game for 30 years. That’s not an insignificant period of time.

And yet, you wouldn’t call him an A-list star, would you? Seems to me he’s a pretty solid B-list star, and probably the better for it.

This is the essence of sustainability. You do what you can. You nudge the peanuts forward.  You keep making whatever micro-movements you can towards your goals. And if you can’t make micro-movements, you acknowledge that you are taking time off and commit to returning to it as soon as you can.

What else can you do?

That’s the secret to endurance, sustainability, professionalism – whatever  you want to call it. You do whatever the next step is that you CAN do. And you forgive yourself for all the things you CAN’T do.