You are here: Home / Sustainable Creativity / The Myth of Creativity as a Solo Pursuit 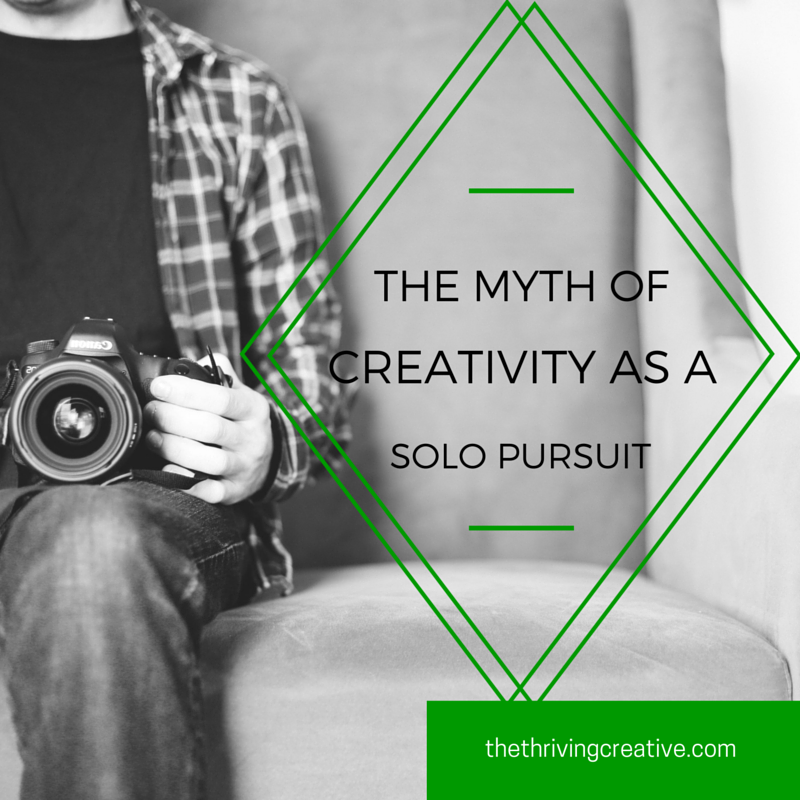 Do you work alone?

Do you hide away in your studio or your office trying to be ‘creative’?

Are you possessive of your ideas or afraid to let others know what you are working on?

You might be doing a disservice to your creativity.

Here’s a take on the subject from Chris Bilton in the introduction to his book Management and Creativity: From Creative Industries to Creative Management.

One of the arguments of this book is that creativity is actually a much more complex, demanding process than simply coming up with bright ideas, being ‘inspired’  or indulging in moments of spontaneous invention. Accordingly, while ‘creativity’ is not the possession of a precious handful of geniuses, nor is it something we all have within us, if only we dared follow our impulses. Rather it depends upon a combination of processes and personalities which might appear contradictory. Creativity requires that we think irrationally and rationally, that we cross boundaries between different ways of thinking, that we not only have the ideas but the resources and inclinations to do something with them. Creative individuals have the ability to hold these different, often contradictory impulses in equilibrium. But the ability to combine different thinking styles and processes is not the sole possession of creative individuals – it is, if anything, more likely to be found in groups of people working together, in teams, networks and systems, bring together complementary competencies and personalities.

The focus of this book is on creativity in systems and organisations rather than creative individuals. This is not to deny that creative individuals do exist, but they certainly do not fit the stereotype of the spontaneous, natural genius. Creativity is difficult.  Even Mozart had to learn to play the piano, even Coleridge started with a first draft. Creative people know how to deploy and manipulate their own talents and those of other people, crossing and recrossing different perspectives and different stages in a process. Shakespeare’s genius depended not only on his own invention but on his ability to draw out and develop his own ideas and the ideas of other people, from the actors he worked with to the historians and storytellers of the past.

Definitions of creativity are riddled with ideas of duality and paradox, the combination of different ideas into new and unexpected patterns, combinations of innovation and value, of different thinking styles, rationality and irrationality. While these combinations might be sustained by exceptional individuals, they are more likely to be achieved through networks and systems.

What do you think?

Having spent much of my career in rehearsal rooms creating theatre pieces I’d say that creativity is an activity that feeds off other people – one person has a spark of an idea, you try it out, another person sees a way to sharpen it – each helps to bring a creative idea into focus. The sum is greater than the parts.

Even when working ‘solo’ we often draw inspiration and ideas from the work of others. You read something, which sparks an idea, you chat about it with a friend, they provide another view – like a football match the creative idea gets kicked and passed across the pitch before it finally makes its way into the goal.

I meet artists (and entrepreneurs) who are afraid to talk about their work or their ideas for fear that someone else will steal them. The truth is that ideas, in and of themselves, are pretty plentiful. It’s the execution of the idea where art, and entrepreneurship, happens. No one else can execute your idea as well as you can. Get over this fear and start to engage other people in your creative process. You will gain so much from doing so.

What do you think? Have your best creative ideas involved other people?